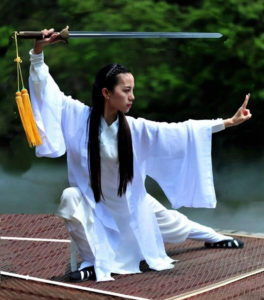 Alchemy of the Earth: “From the deep psyche of the physical body in Water and Fire Alchemy, the alchemist moves to the outer environment of the Earth. The five elements here become represented in different ways. The alchemist breathes in the wood element by relating to forests and all things that grow. He resonates with the fire of lava and the passions of humans and animals, and the sun. The planet Earth itself embodies the earth element at this level. The metal element is represented by clouds, metals inside the earth, and the descending energy of waterfalls. The water element is embodied by rivers, lakes, the oceans, and the deep memory of the collective chi field. In Sun,- Moon-Earth alchemy, yin and yang are symbolized by the sun and moon, and the impact of their cycles on the earth and its inhabitants. The imagery of the boiling pot of water becomes the sun and the moon joining in a loving embrace with the earth holding the center for their beautiful dance. The meditation moves from the navel and lower abdomen to the three dimensional space of the solar plexus. The Creation Cycle meditation from the Fusion 1 practice can still be done inside the physical body, but it can include the energies of the seasons transforming from one to the next in an endless cycle.”

“When one tugs at a single thing in nature, he finds it attached to the rest of the world.” -John Muir