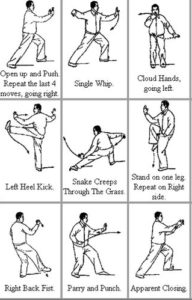 “There was a third type of a person, known as the sage. The sages lived peacefully under Heaven and Earth, following the rhythms of the planet and the universe. They adapted to society without being swayed by fashions and trends. They were free from emotional extremes and lived a balanced, contented existence. Their outward appearance, behavior and thinking did not reflect the conflicting norms of society. the sages appeared busy but were never depleted. Internally they did not overburden themselves. they abided in calmness, recognizing the empty nature of existence. The sages lived over one hundred years because they did not scatter or disperse their energies.

“A fourth type were the natural people who followed the Tao, the Way of Life, and were called naturalists. They lived in accordance with the rhythmic patters of the seasons: Heaven and Earth, moon, sun and stars. They aspired to follow the way of the ancient times, choosing not to lead excessive lifestyles. They, too, lived plainly and and enjoyed long life.”