Fusion of the Five Elements and the Eight Forces: Fusion 1 brings the practitioner into a relationship the five phases of energy in their body-mind.  Fusion 1 integrates these five phases to develop a pearl as the integration and purification of ego consciousness. Fusion 2 and 3 takes the combined pearl from Fusion 1 and moves it through the Eight Great channels. The high quality of energy from the Fusion 1 practice, integrated into the Fusion 2 and 3 practices is a powerful tool for self-healing, especially chronic illness and “mystery illnesses” that may not respond to other treatments. Since the healing with the Eight Extraordinary Vessels occurs at a deeper level, it dissolves chronic diseases that are hard to cure.  It also gives relief to stubborn mental-emotional patterns that do not respond to standard medical or psychological techniques.

The Eight Extraordinary Meridians are sometimes called the Eight Psychic Channels. The Fusion practice teaches the practitioner to become a “Living I Ching” (the Book of Unchanging Changes, 3000 year old classic that is foundation of Taoism). The connection between the eight deep core channels in the body and the eight trigrams of the I Ching is a symbolic system for communicating with the eight cosmic forces that hold form in place and dictate all patterns of change.  When these eight deep channels are activated, a deep body awareness is created.  A practitioner can become a more intuitive and more psychic person. By attuning to the underlying patterns in nature, one can begin to spontaneously receive more information from the larger chi field of the environment. 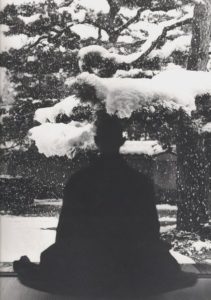 Meditation causes the brain to slow down, overall.  The frontal lobe, which handles reasoning, planning, and emotions, goes offline.  The parietal lobe, which orients us in time and space and takes care of processing sensory information, slows down.  The reticular activating system, which puts the brain on alert to respond to incoming stimuli, dials back the arousal rate during meditation.  The Thalamus, which funnels data from your senses into the brain, slows down to a trickle during meditation.

And just maybe, your life will slow down when you’re not in meditation.